As the Soviet Union bore the brunt of the Nazi attack in the early years of World War II, the American Communist Party enjoyed its greatest popularity with approximately 80,000 members. Although this number rapidly declined following the war and was a microscopic percentage of the 150 million other citizens, some feared that these individuals might commit actions that could jeopardize the security of the nation. Recently declassified Soviet archival sources reveal the existence of more than one hundred spies operating in the United States. Few of these individuals were ever apprehended, but in 1945, federal officials discovered that a pair of State Department workers collaborated with an intelligence officer to pass classified information to Communist supporters. Later that year, an employee of the Soviet Embassy in Canada revealed the existence of espionage within the Manhattan Project. In reaction, a number of the president’s political opponents accused Truman as “soft on Communism” despite his administration’s increasingly severe language about the threat posed by the Soviet Union in Europe.

Truman increasingly believed that the actual threat of Communism spreading in ways that threatened the United States was often exaggerated. He also believed that the CIA, military, and other government agencies were acting effectively to promote both internal and external security against any potential Communist threat. However, for political reasons, he also went along with demands for stricter surveillance of government employees, issuing an executive order authorizing Loyalty Review Boards to investigate and dismiss any employee they deemed untrustworthy. The Attorney General’s office created a list of organizations that it deemed subversive and investigated any government employee it believed had ever been associated with any group on that list. In 1950, Patrick McCarran, a Democratic senator from Nevada, proposed a law requiring all members of the American Communist Party to register with the federal government. Believing restrictions on political affiliation violated constitutional standards of freedom of speech and assembly, Truman vetoed the law. “In a free country,” Truman famously responded, “we punish men for the crimes they commit, but never for the opinions they hold.” Congress passed the law over the president’s veto, with support from both Republican and Democratic legislators.

In February 1950, amid news of Alger Hiss’s conviction and reports of a former Soviet spy’s arrest, Wisconsin Senator Joseph McCarthy addressed a Republican women’s group in Wheeling, West Virginia. The senator played to his audience’s legitimate concerns about possible Soviet spy networks by alleging that he had compiled a list of 205 “card-carrying Communists” who worked for the State Department. In reality, he had no such list, and when pressured to disclose names, McCarthy stalled, hedged, revised the number to 57, and then claimed that America’s enemies had changed his more vague assertion that Communists were working in the State Department into something they knew could not be proven. The experience taught the senator two things: (1) accusations work best when they are nonspecific and (2) allegations of this sort were political gold. McCarthy’s technique of accusation without evidence typified the methods of many during this era. As a result, historians use the term McCarthyismA blanket term referring to both the anti-Communist hysteria of the postwar period and the techniques used by Wisconsin senator Joseph McCarthy. The senator repeatedly issued accusations of disloyalty against numerous individuals and government agencies without providing any evidence of his claims. to refer to the unsubstantiated accusations of disloyalty issued by McCarthy and other demagogues throughout the Cold War period.

McCarthy’s sudden prominence led to his appointment to the House Committee on Un-American Activities (HUAC)A congressional committee tasked with investigating alleged instances of subversion and disloyalty among federal employees. After World War II, the committee investigated a number of Hollywood actors, writers, poets, athletes, and other influential private citizens. Although relatively few of those called before the committee were imprisoned, the possibility of being investigated tended to restrict criticism of the government during the postwar era.. McCarthy and HUAC rose from obscurity in 1947 when they launched an investigation into charges of Communist influence in Hollywood. Scores of actors, writers, and directors were required to testify. Ten believed they were being forced to appear before a witch trial and refused to cooperate. These members of the “Hollywood Ten” thought they could defend their refusal to testify under the Fifth Amendment, but they were still sent to prison on various charges. A much larger number actors and writers were blacklisted based on expressions of sympathy for Communists, previous political associations, and in some cases, gossip spread by others. Among the blacklisted were Orson Welles and Leo Penn, father of actor Sean Penn. Americans were encouraged to boycott films by British actor Charlie Chaplin, who was forbidden to enter the United States for nearly two decades. 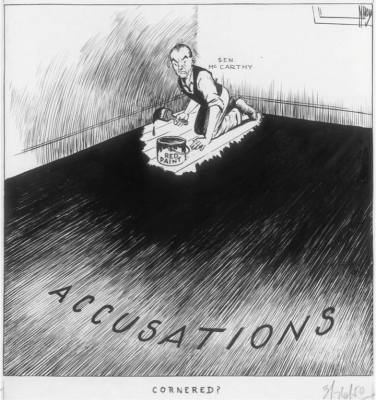 This political cartoon portrays Senator McCarthy as being “cornered” by his own unsubstantiated accusations. McCarthy regularly accused individuals of being disloyal or of being members of the Communist Party but was rarely able to provide evidence of such claims.

African American actor Paul RobesonA multisport star athlete and top student at Rutgers University, Robeson went on to graduate law school at Northwestern, play football in the NFL, and star in Shakespearean drama. Most famous for his singing, Robeson toured the world and spoke forcibly about American race relations. These comments and his embrace of Communism led to numerous investigations and restrictions being placed on him by the US government. suffered the reverse fate, having his passport revoked in 1950 to prevent him from leaving the United States. While some sharing his point of view were deported, Robeson was forbidden to leave the country because when he traveled abroad, he spoke candidly about US race relations. Robeson’s blistering but factual accounts of lynching and Jim Crow were utilized by Soviet agents as they sought to demonstrate the hypocrisy of America and win converts to their doctrines throughout the globe.

Robeson defended socialism partially because he believed that a more equal distribution of wealth would help to erode racism, and partially because many leading socialists were also supporters of civil rights initiatives. Many black leaders in the early twentieth century believed that the communal values of socialism and its enforced economic egalitarianism would help to promote racial and class equality in the United States. When members of the HUAC investigating committee demanded to know his political membership, the former pro football player extended a challenge for the congressmen to follow him into the voting booth and see for themselves. And, unlike many of Robeson’s friends who distanced themselves from the accused performer, Robeson made a point of defending his friends even while being investigated by HUAC. 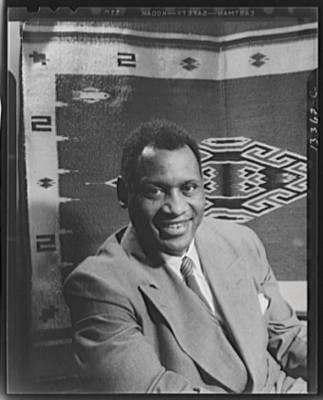 Paul Robeson lettered in numerous sports and graduated at the top of his class at Rutgers and Columbia University. He also played professional football in the NFL and was an attorney, a leading baritone, and an international Shakespearean actor. However, his career was curtailed by the federal government after he began speaking critically about race relations.

After being questioned about the loyalty of Benjamin Davis, a Morehouse and Harvard graduate who wrote for the socialist newspaper the Daily Worker, Robeson responded that he was proud of his friendship with the often-controversial Davis. “I say that he is as patriotic an American as there can be, and you gentlemen belong with the Alien and Sedition Acts,” Robeson exclaimed, likening the prosecution of communists to the late eighteenth century law that criminalized dissent. “You are the nonpatriots,” Robeson continued, “and you are the un-Americans, and you ought to be ashamed of yourselves.”

Few Americans were willing to express their opinions as forcefully as Robeson and Davis. While many historians today celebrate their impassioned defense of free speech, it is important to remember that these men often infuriated even the most liberal Americans of their day with their continued defense of Joseph Stalin and others who are now considered tyrants. As a result, it is often difficult to arrive upon simple conclusions about the meaning of McCarthyism in American history. Clearly one of the long-term consequences of McCarthy’s and Hoover’s actions was the blurring of dissent and disloyalty in the minds of many Americans. The idea of questioning the assumptions of the Cold War seemed “un-American” to many, which led to an era of consensus that encouraged short-sighted decisions. McCarthyism also discouraged a number of politicians from sponsoring progressive legislation for fear they might possibly be labeled as “socialist.” While European and developing nations embraced programs of state-sponsored health insurance, similar measures repeatedly failed, even during periods when Democrats controlled the White House and Congress.

African American poet and author Langston HughesPerhaps the most famous African American poet, Hughes was a leading figure during the Harlem Renaissance. Hughes grew up in the Midwest, and his poetry is heavily influenced by the marginalization many African Americans experienced in the North. was called to defend himself before the House Committee on Un-American Activities in 1953 for similar reasons. Hughes only mildly confronted his accusers compared with a later HUAC trial of Robeson. Hughes tried to explain to the committee that his poetic yet critical lines about freedom in America were inspired by his childhood experiences in Lawrence, Kansas, rather than on Communist ideology. Had the committee read Hughes poetry and learned the story of his childhood, they would have learned how he had been discouraged and even belittled by his white teachers. They would have also found that black children endured informal segregation within the supposedly integrated restaurants, theaters, and even classrooms of the North.

Historians estimate that over tens of thousands of artists, teachers, and journalists were fired or otherwise harassed due to their political views or affiliations during the Cold War. Hollywood studios attempted to forestall government criticism by financing production of explicitly anti-Communist films. Movies such as I Married a Communist and The Red Menace lacked artistic merit and lost money at the box office. Their plots were stale, but they did help to convince government officials of a director’s and studio’s loyalty to the nation. Even the great American pastime suffered, with Jackie Robinson being forced to publicly disown his friend and fellow black athlete Paul Robeson for the latter’s political beliefs. The Cincinnati Reds likewise felt compelled to distance themselves from any possible association to “Red” Communism. They temporarily changed their team name to the “Redlegs” and removed the word “Red” from their uniforms during the late 1950s.

This page is licensed under a Creative Commons Attribution Non-Commercial Share-Alike License and contains content from a variety of sources published under a variety of open licenses, including:

If you believe that a portion of this Open Course Framework infringes another's copyright, contact us.

Return to the Public Course Page